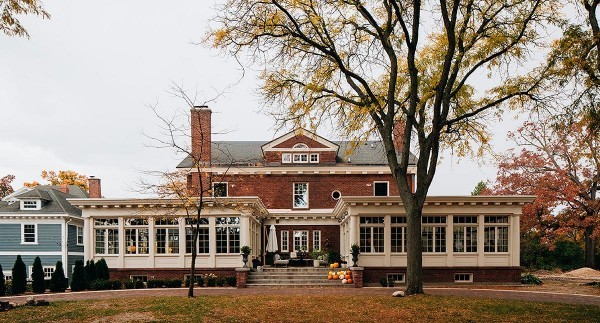 Timeless design can often feel a bit elusive—something you know when you see, but that can be hard to define and harder still to create. Yet it need not remain a mythical concept that many aim for but few achieve.

If anyone has unraveled the mystery of timelessness, it is designer Jean Stoffer and builder Cory Wyma, owner of Kenowa Builders. During their Kohler@Home panel discussion, Stoffer and Wyma discussed their approach to timeless design in their recently completed collaboration on “The Madison” — a historic Georgian Revival-style renovation in Grand Rapids, Michigan.

“Timeless design is something where you can walk into a space and not have any idea when it was created,” Stoffer noted. “There’s no whole set of things that speaks to a specific style or a specific time, meaning it’s much more eclectic and almost collected.”

That was the spirit in which Stoffer and Wyma set to work renovating The Madison, a property one of Stoffer’s clients had alerted her to while it was for sale in neglected condition when its price had just dropped by $100,000. Having worked with him on an earlier project, Stoffer called Wyma about buying and renovating the home as a spec house. He was on board immediately and they closed the following month.

“It required literally everything, every system,” Stoffer recalls. “We had to tear the staircase out, relocate bathrooms, digging out the basement—I can’t even. But it’s turning out to be something pretty doggone amazing.”

The goal with the renovation was to honor the home’s history and character while updating its mechanicals to modern standards and creating a design that combined elements from a range of periods and styles.

Of particular note was tile they found worth saving in one of the bathrooms.

“It had beautiful tile that was put in 100 years ago and it was to the point in the bathroom with the mechanicals that we were going to have to pull it down and replace it,” Wyma recalls. “But the tile was so timeless that we were willing and wanting to take it down in such a way that we were able to use it in a new space, which we ended up actually using it Jean’s showroom as the kitchen backsplash, and it not only looks great, but it’s able to tell a story.”

In addition to combining elements from different periods, Stoffer says that quality is one of the most reliable hallmarks of timelessness.

Echoing Walter Kohler’s saying that “Quality is remembered long after the price is forgotten,” Wyma noted that the satisfaction a timeless piece brings can provide greater overall value compared to a lower-quality piece.

“When you’re shooting for timeless design, yes it may cost more money, but I think at the end of the day you get a better product that will last a lot longer,” Wyma said. “There was a trend of bigger is better, but I feel like we’re finally getting to the point of, ‘Well maybe we can get by with less and go with a higher quality,’ and I think people are going to be happier with that.”

One need look no further than The Madison for validation of Stoffer and Wyma’s approach to timelessness. From its eclectic sunrooms to its inviting bathrooms and thoughtful kitchens, every detail speaks to an aesthetic sensibility that defies categorization and trend.

Visit the Kohler@Home “Defying Trend Cycles Through Timeless Design” session to listen to Stoffer and Wyma’s full panel discussion and explore KOHLER® products that exude a sense of timelessness.

Why These Experts Think You Should Go Bold In The Bathroom

The Art of Designing a Timeless Bathroom